Magnetic resonance imaging scientist Christian Kames has won the Quantitative Susceptibility Mapping Reconstruction Challenge 2016. Quantitative susceptibility mapping (QSM) is a technique that turns an MRI scan into maps of magnetic properties of biological tissues. Due to its high sensitivity to tissue damage, QSM is currently one of the hot topics in MRI. 24 teams submitted their methods to the 2016 challenge which was part of the 4TH INTERNATIONAL WORKSHOP ON MRI PHASE CONTRAST & QUANTITATIVE SUSCEPTIBILITY MAPPING in Graz, Austria. 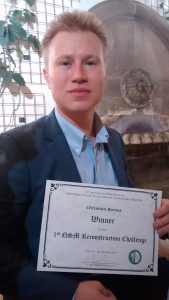 Our novel technique for improved detection of white matter lesions, FLAIR2, has been popular with researchers. It is currently (September 2016)  the 17th most read paper in the American Journal of Neuroradiology.

By combining co-registered 3D-FLAIR and 3D-T2 scans, we have developed a technique, which enhances multiple sclerosis (MS) lesion contrast while maintaining cerebrospinal fluid (CSF) suppression. FLAIR and T2 are already part of the standard imaging protocol for MS, while the acquisition of double inversion recovery (DIR) is strongly debated. DIR has been proposed as the gold standard for MS lesion detection, with a particular advantage for cortical lesions, however, the strong signal loss resulting for the suppression of white matter and CSF hampers lesion identification. We believe that FLAIR2 may suffice for MS lesion detection and additional scan time invested in DIR and other 2D imaging sequences may be saved. We see this as an opportunity to increase image quality of the conventional MR scans without the typical trade-off towards longer scan time.

Our recent publications on advanced MRI of concussion in ice hockey players were featured in several news stories, including a cover story in the Vancouver Sun and an interview with CBC. 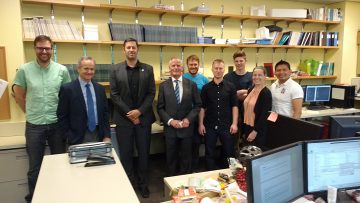 In the spring of 2016, Professor Gareth Barker from King’s College London held an MRI sequence development course, which was organized by Drs. Shannon Kolind and Alexander Rauscher. We thank the Child & Family Research Imaging Facility for hosting the course and General Electric for their support..

Dr. Rauscher has been featured in “Synapse of Discovery“, an article on UBC’s website exploring the work being done at the Djavad Mowafaghian Centre for Brain Health. MRI science is featured alongside other top research at the DMCBH.

“The MRI scientists at the DMCBH continue to develop new methods for investigating the human brain,” says Alex Rauscher. “They work on techniques that are extremely sensitive to injury in brain tissue, such as Multiple Sclerosis (MS), stroke, or traumatic brain injury. They have also developed techniques that are sensitive to tiny bleeds in the brains of people with Alzheimer’s disease, that can’t be seen with conventional MRI.”

“This technique teases out the subtle differences in the development of MS lesions over time,” Rauscher says. “Because this technique is more sensitive to those changes, researchers could use much smaller studies to determine whether a treatment – such as a new drug – is slowing or even stopping the myelin breakdown.”

The paper by Wiggerman et al  was published in the journal Neurology.  We use MR frequency imaging, e.g. maps obtained from the phase signal of susceptibility-weighted gradient-echo image acquistions, for the investigation of tissue changes due to MS. In contrast to conventional MR images, such as T1 or T2, frequency shift imaging provides the possibility to quantify tissue changes and relate them to the pathology of MS. This is of interest in MS lesions, which are focal areas of damage appearing in the brain or spinal cord, but quantification of damage beyond the number of lesions observed or their size is of particular interest in MS as we know that diffuse pathology, that appears ‘normal’ on conventional MRI, is actually abnormal. More advanced imaging techniques, such as MR frequency shift imaging, are needed to describe this type of damage in MS.