Over the past several years we have been conducting prospective study in which we applied a variety of advanced imaging techniques to better understand the effect of concussion on the structure of the brain. In this study we followed two collegiate level ice hockey teams and performed MRI scans pre- and post-season. The subset of players who suffered concussions over the course of the season were also scanned at 3 days, two weeks and two months post injury. This study has the rare advantage that we obtained imaging pri 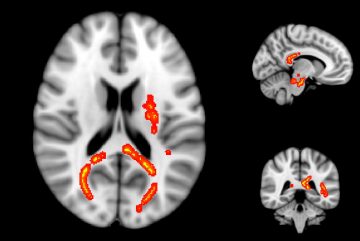 or to the occurrence of injury allowing us to make direct comparisons between the healthy and damaged brain in humans. Our first publication showed brain volume decreases in hockey players over the course of the season, and examined the frequency and location of lesions on SWI and FLAIR images. Our second publication was the first study to use myelin water imaging (MWI) to measure the damage caused by concussion, and we showed that myelin in concussed athletes is damaged in the weeks after injury but typically recovers within two months. This work has been presented at the annual meetings of the ISMRM, RSNA, International Brain Injury Association, and the Mayo Clinic’s Ice Hockey Summit II. 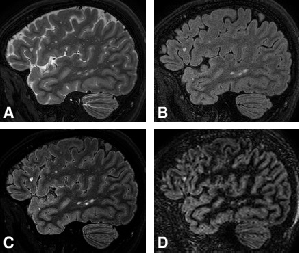 By combining co-registered 3D-FLAIR and 3D-T2 scans, we have developed a technique, which enhances multiple sclerosis (MS) lesion contrast while maintaining cerebrospinal fluid (CSF) suppression. FLAIR and T2 are already part of the standard imaging protocol for MS, while the acquisition of double inversion recovery (DIR) is strongly debated. DIR has been proposed as the gold standard for MS lesion detection, with a particular advantage for cortical lesions, however, the strong signal loss resulting for the suppression of white matter and CSF hampers lesion identification. We believe that FLAIR2 may suffice for MS lesion detection and additional scan time invested in DIR and other 2D imaging sequences may be saved. We see this as an opportunity to increase image quality of the conventional MR scans without the typical trade-off towards longer scan time.

We have also found that the excellent contrast-to-noise ratio of FLAIR2 images improves the performance of automated lesion detection software when comparing to lesions marked by radiologists, in contrast to using T2 or FLAIR alone.

Future Work: Our current work focused on the evaluation of 3D-FLAIR2 images, however, we believe that retrospective calculation of FLAIR2 in studies containing 2D-FLAIR and T2 scans may provide an avenue to increase sensitivity.

We use MR frequency imaging, e.g. maps obtained from the phase signal of susceptibility-weighted gradient-echo image acquistions, for the investigation of tissue changes due to MS. In contrast to conventional MR images, such as T1 or T2, frequency shift imaging provides the possibility to quantify tissue changes and relate them to the pathology of MS. This is of interest in MS lesions, which are focal areas of damage appearing in the brain or spinal cord, but quantification of damage beyond the number of lesions observed or their size is of particular interest in MS as we know that diffuse pathology, that appears ‘normal’ on conventional MRI, is actually abnormal. More advanced imaging techniques, such as MR frequency shift imaging, are needed to describe this type of damage in MS.

Iron accumulation in patients at onset of bipolar disorder

Many psychiatric disorders in their early stages are difficult to monitor using MRI, as, in contrast to neurodegenerative diseases, brain changes are rather related to alterations in the chemical composition than to structural changes. Therefore, MR spectroscopy and PET imaging have been the main tools for assessing changes in metabolic activity in patients with bipolar disorder. However, recent studies have also shown that metabolic changes in the dopaminergic system or mitochondrial injury can be driving factors for increasing brain toxicity through the elevation of reactive oxygen species (ROS) in the presence of brain iron. The presence of accumulation of iron, on the other hand, is measurable using gradient-echo imaging and may be quantifiable on quantitative susceptibility (QSM) or R2* maps.

In this CIHR-funded project in collaboration with Dr. Yatham from UBC’s department of psychiatry, we scanned 30 healthy controls and 30 patients that experienced a first maniac episode, to assess early or pre-existing brain changes, using MR spectroscopy, QSM and R2* imaging.

In this study funded by NSERC we investigate the MR signal of anisotropic tissues.

We use MR frequency imaging for the investigation of dorsal column transection induced spinal cord injury at 7T. Here, we are particularly interested in seeing the effect that microstructural changes alone have on the frequency shift signal. The rat spinal cord is a ‘well-behaved’ system, as the cord can be aligned with the magnetic field without including orientation dependent effects, and rat spinal cord injury models are well studied. In this work, we investigated MR frequency shifts due to Wallerian and Retrograde degeneration 5 cm away for the transection side, in ascending and descending tracts. The different degeneration types differ in terms of their time line of demyelination and axonal loss. To study the frequency shift evolution due to the progressing injury, the animal were scanned at Baseline, 3 weeks and 8 weeks after injury, and compared to healthy control rats. Histopathology for myelin and axonal markers, as well as for activated microglia gives us insight on the biological mechanisms underlying the MR signal changes.